My husband Andy, had been wanting to get a horse for a few years now-not actively sorting through the local ads-but just on occassion. One day, there's an ad on Craigslist with photo's of him all saddled up with a woman on him-kid's horse, husband horse-were the key words. So, we decided to go take a look, and as if I hadn't learned my lesson previously or rather because I was exceptionally lucky with Cowboy, yes-soft eyes was a determining factor.

It should have been a clue that this "husband horse" would absolutely not come near said seller's husband, but wow!, look at that smooth trot! This seller had the boy for about 6 months they said, saw a child ride him on a lunge rope for 45 minutes he said. Rode him around their property he said. No vet check, No riding. We'll take him!

March 16th 2018 was the day we were to pick him up or actually that I was to go pick him up with the assistance of my then farrier-to note, hubby wasn't there to witness the loading of this horse and this was truly a blessing. In a seemingly never-ending drama in real life, Zorro-which what he was named and probably cause for 90% of his attitude, took to getting into the trailer like anyone would jumping into shark invested, chummed waters. It was not a pretty sight to see. From rearing, turning and kicking-he was finally loaded.

Once inside the trailer, he was a perfect gentleman. And then we got to the ranch. He was unloaded and I thought perhaps a little stretching out in the arena would do him some good, as we walked he would randomly throw his head seemingly with every ounce of his weight migrated to his head and dive for the green grass, another favorite was a kind of sideways headbutt towards whoever was leading him. It was great fun!

Andy came down a bit later and he soon began to bubble with personality. Standing on either side of him while tied up would attract biting. Picking up feet-a whole body curve while kicking at you sideways. In the first week, besides being bitten, he managed to do some sort of tomahawk move with his rear foot upon Andy's baby toe and broke it. Andy decided his name shall be Beau, in my head his name was Mr. Personality. That quickly changed to Satan.

The next several weeks was more of the same. Take him into the round pen-he'd face you, move to the back to get him moving, disengage hind quarters and stare blankly at you. Bend down-he'd lose his mind. Use a lunge whip, mind you not even touching him, and he'd flip out double barrel kicking. To say that I thought this horse was far from a husband/kid horse is a complete understatement, unless of course you hated your husband and kids and had a really good life insurance policy on them. I decided to do a bit more research and actually found the previous, previous owner's ad for him and I couldn't believe my eyes!

A little girl, bending down at his feet, without a skull crushing stomp, in saddle with a big smile. A child's lesson horse, unbelievable! I hadn't had the nerve to get on this horse, but after seeing that-decided to give it a try. Saddled him up, walked to the round pen and got on. No Buck, no bite, no kick. Also, no walk forward-at all. He would take steps backwards, but no verbal cues, no leg pressure-nothing. My legs would bounce of his sides and still-nothing. Oh boy, my impatient personality is ready to snap.

At the end of June, I took Beau to the round pen to try a different approach and once again attempt to get out of the cat and mouse game of look how good I disengage my hindquarters. As I stood next to his offside, it happened. He turned his head and bit my leg-OH HELL NO! Yes, there was an immediate response from me as my head spun off and the decision was made. 30 days. And off to the arena we went.

Conveniently, at the side of the arena is a lunge whip with a white plastic garbage bag attached to the end. I picked it up, put the lunge line on him and asked him to move, he responded with his usual-double barrel kick, and that was it. Like a crazed maniac who's been off their meds, I ran towards him with the dreaded trash bag, whether it was the trash bag or the conversation we had on the way to the arena indicating his limited time-he moved his damn feet and to this day when asked to move on a lunge line, not one single kick, not even a hint of one.

On day 14 of his 30 days to put up or shut up-he moved forward in the saddle. The video below captures this moment-I was shocked, yet pleasantly surprised. In his first 30 days, he not only grudgingly walks in the arena-my feeling is he was lesson horsed to death and is completely arena sour-but he now self loads into a trailer. YES, self loads!!! He was far from husband ready-but he did show effort and earned another 30 days.

He and Cowboy are now buddies, they bonded after they both got loose and decided to gallop away together visiting the other horses. He isn't trying to bite my head off anymore, but is still a bit mouthy. He greats me with a loud whiney when I come and I laugh as he rolls in the arena grunting and groaning like a 90-year-old man.

Seeing that we are at the end of August, decision for another 30 days has been made. I must say that at no time have I been able to get him into a trot in the arena-just not happening. Two days ago I decided to try my luck on the trail, I put him in Cowboy's bitless rope halter with mecate reins and walked out of the arena, his walk was not dragging, he was interested and curious going out and I was pleasantly surprised. I did hand walk him about 500 feet on the trail initially, then hopped on!

Not only did he walk out alone, but that trot I saw from the ground, it is just as wonderful in the saddle. He did it! Smooth transitions from walk to trot and trot to walk. He earned another 30 days. There is hope. 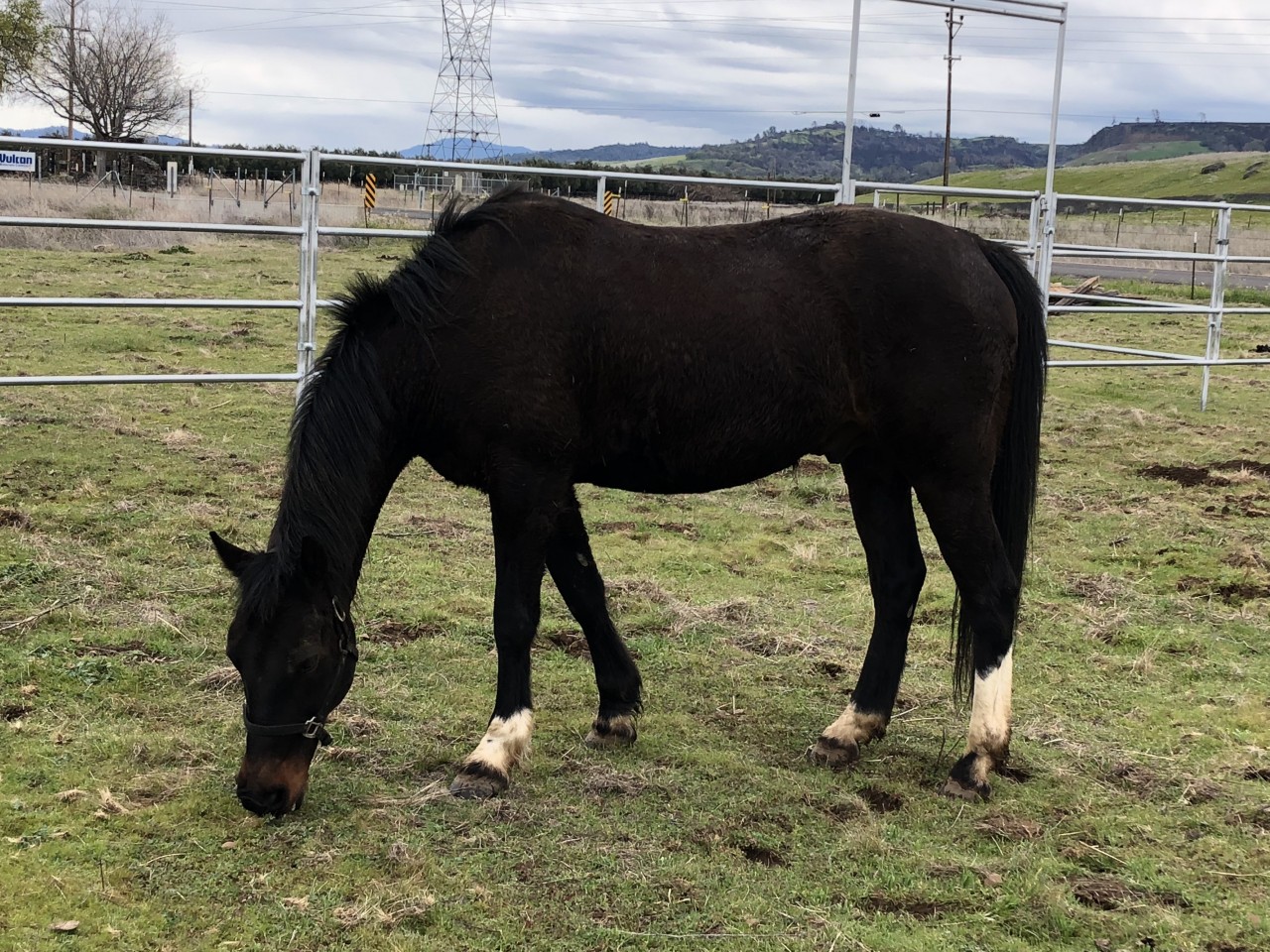 Andy, my hubby with his new horse after days after bringing him home-still has a smile on his face, Beau's ears say he's pretty disgusted with the whole St. Paddy's Day headband-Welcome to my world! 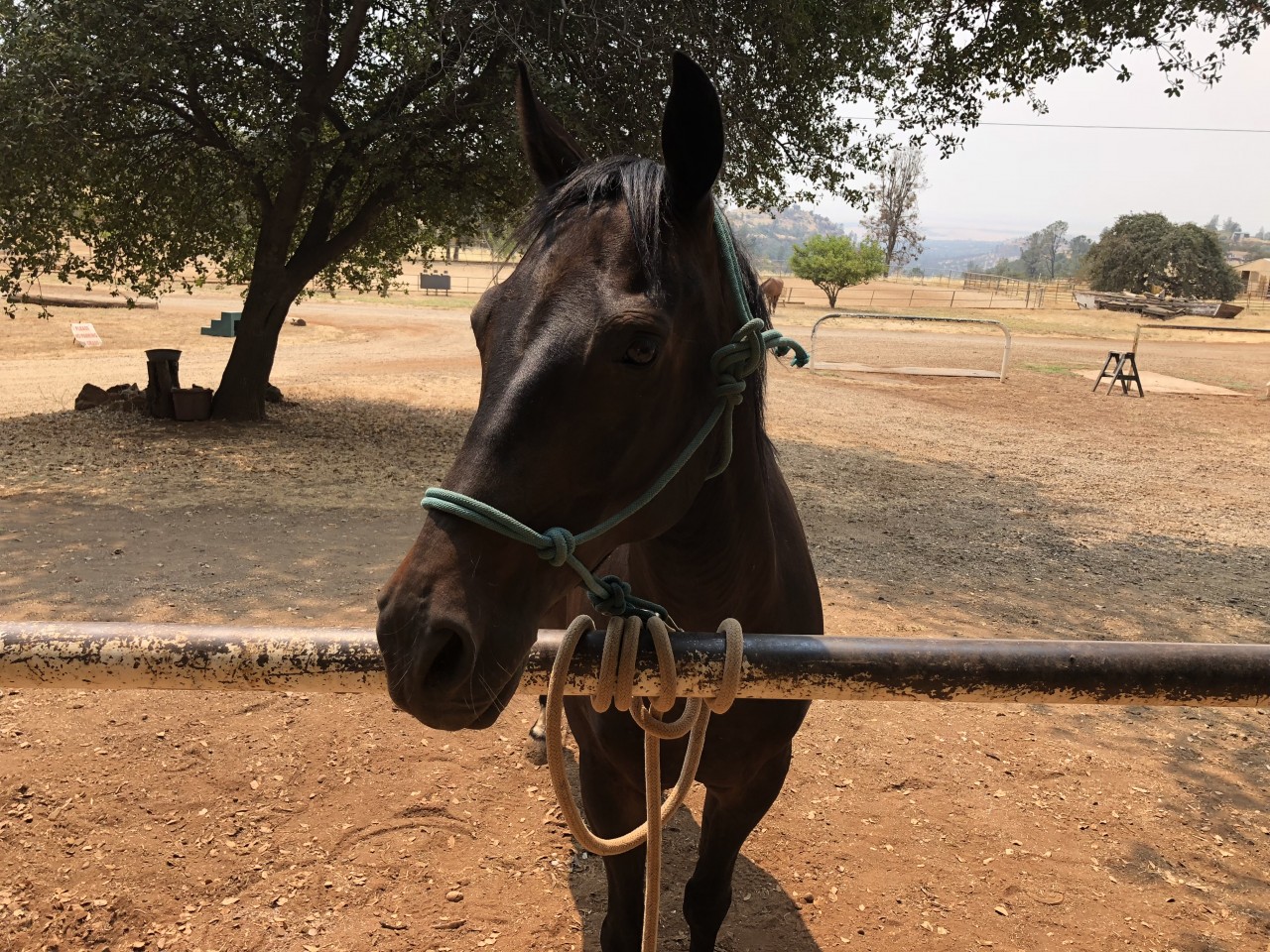 My name is Tammy Waller Aviles, I am a wife, mom of 5, grandmother to 7, real estate broker and equine photographer living in a beautiful Northern California mountain town of Magalia.

I am originally from Los Angeles but moved north in mid-2002. My grandfather had a horse named Pedro (You can get a glimpse of him in Cowboy's introduction here) and that is where my obsession with horses began and never faded!

With kids out of the house and living in an area where having a horse was feasible, at age 47 I took the leap and purchased my heart horse Cowboy.

It's been four years now and what a ride it has been! I hope you enjoy our adventures.

Get Updates Via Email